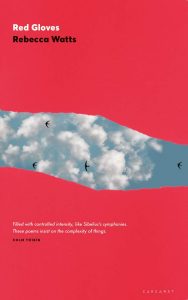 Rebecca Watts’ second poetry collection Red Gloves is a gathering of objects and their willingness to remain or disappear, along with our willingness, as humans, to stay or to leave; it is an embodiment of a decline transpiring right under our noses.

The author uses a hobnob of narrative and lyrical techniques, creating arcane, uninterrupted energy to generate a push and pull responsiveness to the collection’s idea of deterioration.

The opening poem ‘Economics’ begins with a single line stating that ‘Everything comes down to numbers in the end’. The poem is an answer to a question:

You asked me would I move to the city to be with you.
I’m telling you what I saw; you can do the maths.

It is a stop and listen, and a reason why. As she surveys the landscape, Watts describes an ordinary yet extraordinary bucolic morning, listing what she sees in detail. The use of the first person epitomises this inventory of the recognisable, solidifying the narrator’s decision to stay—to maintain true to the part that sees the numbers and the view.

The title poem steers towards the process of leaving. ‘Red Gloves’ is a witnessing of death—a coffin carried out by the hands of women. This poem is a balancing act; describing stillness but also trauma, turmoil, and movement within. The women are the keepers, holders of life, and the vessels bearing everything around them:

The poem is structured from a spectator’s viewpoint, presumably, a female’s moving as it does to the first-person plural as she reflects on the have to’s in life and what women are capable of enduring. Progression. Adaptation.

However, ‘Notations for a Hospital’ is a view of life and death, decisions of letting go and holding on. Hospitals have the capability of carrying a range of life stages and conditions. Watts has the unerring ability for putting a name to the silent energy that remains present in a hospital, unfolding the stanzas, leaving them concise. The poem descends, annotating the layers of the building one by one:

Level 10: a crow
flirts with the guardrail.

The highest level, a crow, so often a symbol of death, is perched on the edge with a decision to take flight or to stay grounded. Continue down and you’ll find life lingering with the departed,

Then once inside, a frustrated tone seeps in—a commentary on the inside:

It is the pleading, the last breath, followed by the conclusion that ‘These corridors self-refer’. In this poem, the hospital hallways, with their silence and objects, need no supplementing; they simply are.

‘Disappearing Act’ sheds light on the unknown—the undecided, the nameless face to an ending. Using run-on lines in two-lined stanzas, Watts creates a white-spaced silence in the flow of the poem. Each stanza comes to a conclusion, a reason why:

a ripple
out of the corner of your eye:

something wrong
though nothing

you could place
a finger on.

The author has managed to put a finger on what it feels like to leave something gradually. At first, our minds refuse to acknowledge a withdrawal, until all at once we disappear without explanation:

I fear one day
I’ll do great

mischief
without intending to.

Lasting and startlingly honest, Red Gloves puts a voice to anonymous questions, sharing observations on the interactions amongst the human and the nonliving. Watts’ words are a hello to a new perspective and a farewell to the mundane, completely reworking our stance on our association with objects.