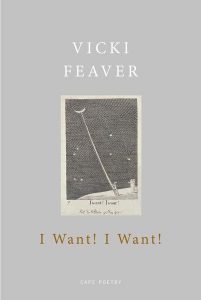 one boasts an errant streak […]
(‘These roses you gave me’)

Perhaps it’s unsurprising that these lines come from a poem with the central metaphor of flowers. Vicki Feaver, more than almost anyone, has seized that subject, daring to write it – as a woman – not in the expected pretty terms, but in ways which are sharp, sexy and frequently downright difficult. Her interview in Magma 13 (‘No more “Mrs Nice”‘) details her horror at overhearing Arvon students describing her as ‘so nice’. This prompted her lasting concern to find the core evil in women. Most famously, she achieved this brilliantly in ‘Judith’, taking her skin as she murders Holofernes. Undeniably extraordinary, but in I Want! I Want!, Feaver has written a collection-length verse memoir, and the autobiographer’s most churlish character will always be herself. Understanding the poet’s search into female darkness, how hard can the poet investigate her own inner Judith?

Set chronologically, from the times of the tiny girl to her present late seventies, I Want! I Want takes both title and direction from William Blake’s remarkable engraving of the child with the ladder, crying for the moon: an image, originally forming part of a tiny book created for young children, which always seems ahead of its time. Blake’s lifelong influence is clear from Feaver’s early figurative and literal grasping of his work, and her consequent decision to become a poet herself. His themes thread throughout this collection, and Blake-like, she utilises a ladder drawing as a visual indicator at moments of particularly momentous falls and hovering heights. Rather more than mere pauses between chapters, and just as ripping apart Blake’s overlapping forms make for an inadequate understanding of his intentions, these images carry a great deal here. Significantly, her final poem, a valediction to her surgeon and organist father, is also a song, set to hymn music.

From the outset of ‘Finding my Father’, however:

I was expected to reach
the highest rungs.

I climbed for years,
the rungs rotting[.]

This is an unsentimental memory of a childhood where often ‘fear lodged in her body/like shrapnel. All her life// she was torn – her head/ and her heart split in two’.These quietly traditional stanzaic poems with crafted line breaks, and deceptively accessible imagery and vocabulary are a masterclass in how to write poetry, poetry which is confident in its intelligence, and is without the need to flag up its own cleverness. There are touches of not only Blake, but Yeats, Plath, Gillian Clarke, Chekov, Clive James and more as the poet moves from a childhood which bears real witness.  Here is the reality of the child’s perceived responsibilities, potency and unglossed reactions, then coming of age statements with more overt rebellions. Childhood’s gilded innocence is well-tested.

Many of these mutinies are internal, but many are against her disquieting and dominant distaff line. Feaver’s problematic relationship with her mother, ‘The Woman who Married a Man who loved Silence’ is painful in its integrity. Throughout, her mother, and grandmother use her head as a battleground; there is no easy peace.

Though a continuous narrative, the collection does not deal equally with passing years, but focuses on periods of transition. The young and old Feaver are drawn sharply, and this shapely collection mirrors imagery like the bed, blackbird, mower and an Anglo-Saxon kenning, reflecting from a changed perspective. Increasingly aware of how death comes ‘creeping behind her/in velvet slippers’ there’s the haunting of

But now the curator’s
retired, the ordered
shelves are in chaos.
(‘Forgetfulness’)

However, the final ladder moves, in ‘Shedding’, to an appreciation of the once ‘shrivelled spirit’, now glorying in decay,

Time to begin shedding,
to jettison the weight
of belongings

Throughout, the poet, who gives fearlessly of the personal with a considerable shared universal, finds her Judith. A Judith no nastier than anyone else’s. Vicki Feaver’s courage however is in confronting and revealing her.