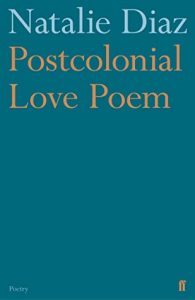 Amongst other dedications in Postcolonial Love Poem, Natalie Diaz singles out bodies—’towards our many bodies of flesh, language, land and water.’

Bodies are critical because they are primary symbols of the self and constants in our equations with others; whether it is love or war – these bodies form tribute and legacies, weapons and fields. It is Diaz’s preoccupation with these bodies, with how they collide, chafe against, desire, and destroy each other that gives this collection its glowing intensity.

In ‘American Arithmetic’, Diaz outlines in brisk numbers how racism has hacked and dismembered, not just individual but also collective bodies of races:

Native Americans make up less than
1 percent of the population of America.
0.8 percent of 100 percent…

We are Americans, and we are less than 1 percent
of Americans. We do a better job of dying
by police than we do existing.

One of the themes of this collection is that as there are different types of bodies so are there different forms of violence. ‘Snake-Light’ one of the four ‘Light’ poems in this collection, is a disquisition on the rattlesnake. The rattlesnake is a recurring symbol in American history―it appeared on the Gadsden flag and became an icon of the American revolution. Originally, however, it was an important character in various Native American legends, and a motif for colonies that never attained freedom. Here, the snake serves as metaphor for the poet’s self (‘The rattlesnake. I. Are ampersand.’); for writing (‘Lines are shed like snakeskin—rubbed against/ the rough white page, released.’); and for Native American history (‘Americans celebrate the rattlesnake in rattlesnake rodeos—/ round them up, kill them, sell them.’). All these bodies are susceptible to cultural violations which seeks to subsume them until each of them can be:

Like the rattlesnake on the flag, such spiritual colonisation also has physical repercussions. In ‘The First Water is the Body’, Diaz articulates her sense of oneness with the river Colorado—one of the most endangered rivers in the US―its being and suffering. This is an awareness she has inherited. She writes, ‘In Mojave thinking, body and land are the same’:

I carry a river. It is who I am: ‘Aha Makav. This is not metaphor…

We carry the river, its body of water, in our body…
I mean river as a verb.

Tension between the white and Native American experience on the landscape is played out as tension between English and Mojave expression on the page. Throughout the collection, languages riff off against each other – English, Spanish and Mojave; they perform an intricate dance that Diaz choreographs in order to probe and resume meaning. In ‘Ode to the Beloved’s Hips’, she draws from a variety of lexicons, chiefly Catholic, to express deep sexual joy (‘to them I come—struck dumb,/ chime-blind, tolling with a throat full of Hosanna’).

It is her great gift as a poet: using cultural tension to create a pulsing personal syntax. Then there is her exquisite craft: using the surprising but exact word, the ingenious metaphor, all marked by an energy which elevates emotion to rapture. Here long liquid sentences suggest a rush, a rising passion, pinned by incredible images:

In Postcolonial Love Poem the text performs the body making reading a deeply physical experience. Natalie Diaz’s skill makes it possible for each poem to become ‘a cabochon polished/ by our mouths.’ (‘Postcolonial Love Poem’). Born of the fracases that continue to fissure land, language, and culture, Natalie Diaz’s second collection is all that one might hope for. And more.