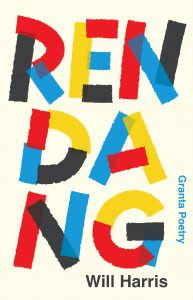 Sitting outside in a motorway cafe on a cool August evening after the mizzling rain, Kirsty Gunn and I talked intensely (as we do) about a novel we had difficulties with. Many of our exchanges were underpinned by the question: how does form and genre enable writing to tackle its subject matter successfully?

Will Harris’ debut collection explores a range of issues many of which circle around belonging and ancestry, of finding a voice to bridge the faultlines of cultural and personal identity (Harris has Chinese-Indonesian-British ancestry).  It opens with rootlessness but Harris’ distinctive response is to pose the challenge of such fractures as one of poetics. Reassemblage, pursued initially through Derek Walcott’s broken pottery metaphor is posed as a question, not an answer: ‘That can’t be taken; granted’ (‘State-Building’), the semi-colon positioned between words holds different reading possibilities. Later, ruptures are re-imagined as Sonic the Hedgehog jumping between levels and states in a poem whose own disjunctures are spatialised as textual patchwork. Like many long poems in Rendang , ‘The White Jumper’ straddles a host of other popular cultural imaginaries in situations dream-like or more quotidian; it moves from screen to street to room to the Unconscious to screen game to childhood memory, to someone else’s dream and so on, leaping ‘from one grassy platform to another’.

The collection as a whole shuttles between real and imagined states, between locations (Indonesia, Turkey, Illionois, London among others), and betwixt high and popular in a way that disrupts conventionalised hierarchies; in traversing ruptures, Harris shows a striking ability to ‘complex stitch’ tableaux, situations, textual fragments and allusions seamlessly. Harris’ remarks on Caspar David Friedrich’s series of moon paintings is initially framed by a seemingly throwaway reference to the Nazis admiration of the artist’s ‘blood and soil vision’. The phrase allows Harris, some lines later, to ask

but blood and soil makes me

think of bloodied soil. Do some people imagine themselves
in the same relation to their place of birth as a scab to a wound?

Rendang is a collection that utilises voice as lyric musicality pivoting on sound, snatches of dialogue and remembered phrases from speaking, singing or thinking aloud. Reading, like writing, spools on similar sounding words, and words broken into syllables and units to engender new semantic possibilities (‘Buddelia Not Buddha’ or ‘Say’). Harris has a fine ear for those slight modulations of phonemes which, when uttered, return one in memory to what was said before, as much as what is said in the now. Witness the play with Rendang (an Indonesian stew), whose letters contain within it other words and meanings―rend, render― or sparks other words: rendezvous, rendzina, rending. Consider also Harris’ playful punning on the word shallot (a vegetable to cook and eat, but also Tennyson’s famous lady), or the pathos of embodied/embedded when describing Chinese Indonesian history (‘Glass Case’).

Cuts, breakages allow both the original and its fragments to be held in the light; in this way, poetry is imaginative activity, both sound and meaning:

You slip into the break and look around, see past and future,
love and sickness rearranged. Reordered. You feel yourself
both whole and breached. And me you. As you do…
like daylight breaking through an open door. (‘Break’)

In ‘Yellow’, the tale of William Robinson who passes as Chung Ling Soo the magician based on the real Ching Ling Foo (born Zhu Liankui) allows Harris to inhabit and yoke two deaths imaginatively. Generosity is a virtue to be cherished: ‘There was the openness with which he walked into that old man’s home, the same way Hayley opened hers to me. A stranger.’ (‘Rendang’)

How does form enable the writing to tackle its subject matter? Among his other literary allusions, Harris cites a line from Hart Crane. Crane’s famous phrase is a celebration of song’s silken, skilled aspects―its rhetoricity―which enables all that is suggested by his neologism ‘transmemberment’: transform, transition, remember, dismember, member. Rendang offers sonorous, capacious, porous poetics. This is poetry that sings… ‘the silken skilled transmemberment of song’.