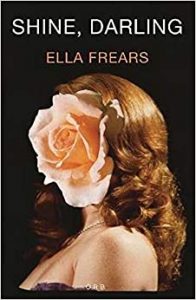 One may be surprised to discover that Shine, Darling is Ella Frears’ debut poetry collection. Frears presents an unapologetic front through her straightforward style, favouring lyric poetry as her medium. There is a raw intimacy to perform these experiences, whether it be a near-abduction, a suicide when she was in college, or having sex on bins in Cornwall, Frears will bring the reader into the heart of it all. As she says,

otherwise
It doesn’t work; otherwise none of this works.

In this collection, the moon appears as an overarching symbol. It is a common friend Frears can call on as a protector in times of darkness. It creates a midnight light that reveals truth within her life. At the centre of Shine, Darling is probing of truth in language. Frears is taking her experiences to question how we read things. For example, in the opening poem ‘I Knew Which Direction’, the moon establishes the pathway; the repetition of the word ‘moonlight’ giving the poem a sense of transparency in language. For she says,

Until it was no longer a word but a colour and then a feeling
and then the thing itself.

The idea of the word ‘moonlight’ transforming into ‘the thing itself’ offers this idea of a straightforward understanding in language – for it is what it says it is. However, this clarity becomes hazier through the rest of her work. Her opening stance of a simple truth is blurred. In her closing poem ‘I Asked Him to Check the Roof, Then Took the Ladder Away’, we get the final image of both the moon and a male counterpart in the same frame. She accompanies this with a tone of flirtation and humour used throughout Shine, Darling; the said title echoed,

As the guests left I looked up and realised that there
was no moon. Shine, Darling. I whispered.

And from the chimney rose his little head[.]

The ambiguous nature of both the moon and the man become entwined; we don’t know if ‘his little head’ is her beloved moon or a man whom she has previously ridiculed and looked down on. This brings us back to that opening poem, dealing with our understanding in the truth of language. Frears wants to hold back a part of the answer to make way for that needed ambiguity in poetry.

The collection itself isn’t split into parts; however, a long pause is created in the middle with the 17-page poem ‘Passivity, Electricity, Acclivity’. In the first half of the collection, we see Frears’ loss of innocence – we watch as she grapples with feelings of guilt, fear, and the danger of the world, before coming into her own adulthood. The poem consists of fragmented verse and prose, jumping back and forward between different experiences before all concluding with the repetition of ‘you’re fun’. It is here we learn of her near abduction, experience with suicide, and how men truly impose on her life. We also learn how Frears accepts the truths that others give her. At first, she appears stand-offish, knowing that she can manipulate men how she pleases. Thereafter, she becomes more of the person others label her as. For example, she becomes the best friend of someone she rarely knew, embodying also the rumours that had once followed her around as a young woman.

I say nothing, I open my mouth.
Who am I to say no to this?

In this way, Frears is transformed into the truth that others hold of her – similar to how someone reads a word and believes the truth in it, thus returning us to truthfulness and transparency in language. For a first collection, Frears’ approach is very admirable and entertaining at times despite the darker experiences that run through it.  She embarks on her own journey, and this is where Frears truly shines.