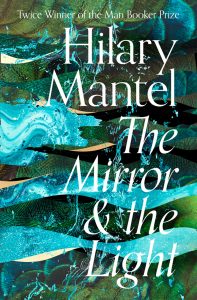 Rarely do works of historical fiction immerse the reader in the protagonist’s thoughts so completely as in this last volume of Hilary Mantel’s Wolf Hall trilogy.  Written in the first person, from Cromwell’s point of view, Mantel’s narrative is so convincing that it is sometimes difficult not to take this for Thomas Cromwell’s actual memoirs.  His perception of the Queen’s execution in the opening pages is so visceral that we can only hold our breath;  Cromwell later reflects that ‘we all killed Anne Boleyn’ and we feel with him the pathos of its significance: ‘He saw the light flash on the steel and he saw that there were words written on the blade … Mirror of Justice.  Speculum justitiae.  Pray for us.’  The scene is set for a series of dramatic events that come to a head—so to speak—in a form that rises to a Shakespearean tragedy.

Guilt and self-satisfaction are paradoxical emotions which Cromwell intermittently encounters throughout his last years (1536-1540).  The lengthy Tudor story enthralls with historic plots involving royal marriages, alliances, succession, rebellion, religion, persecution, plague and power struggles at home and abroad.  The show-as-well-as-tell style demonstrated by Mantel in her Booker Prize prequels, Wolf Hall and Bring Up the Bodies, is matched in this third volume, with humour often playing a key role: ‘The king wishes to be known as Henry, Mirror of Justice.  But perhaps he will be known as Henry the Bad Leg.’

Mantel’s evocative descriptions of food, costumes, characters and settings bring to life the unimaginable wealth, greed, vanity and desires of the merciless monarch and his contemporaries. Cromwell is a leading figure in the charade, describing—even privately—the king as ‘the mirror and light of all other kings and princes in Christendom’.  The ruthless, often violent road to Cromwell’s exceptional power and influence is accompanied inevitably by the deceptions of long-term antagonists. His betrayal by former confidantes signals the end for our antihero; beauty and terror in equal measure: ‘The water rocks beneath them, cerulean blue.  The Tower is in sight.  The flint sparkles like sunlight on the sea.’ Cromwell’s moments of success are frequently described in luscious, decorative prose, such as when he secures his son a Seymour bride: ‘But that night my lord Privy Seal sleeps soundly, under his canopy of violet and silver tissue, beneath a ceiling dusted with gilded stars.’  The same is applied equally at times of crisis, as when Cromwell fears the Italian fever will grip him again before the plan of Henry’s marriage to Anna of Cleves is complete: ‘”Gregory, I must use my time.  I have less than twenty-four hours.”   Before my bargemaster rows me again, and dips me in the river Styx.’  That union marked the beginning of the end.

Mostly, our sympathies lie with Cromwell in The Mirror and the Light. We understand his reasoning, we empathise with his suffering at the hand of his father, his disadvantaged family background, and his struggles as the son of a blacksmith in Putney.  But as his ambition increases, Mantel begins to reveal a darker side, symbolised by Cromwell’s his habit of carrying a knife under his cloak and his ruthless revenge on his childhood tormentor, the ‘eel boy’.

Cromwell spends much time in this book reminiscing on past loves, regrets and relationships with friends like Wolsey but nowhere do ghosts haunt him more powerfully than when incarcerated in the Tower.  Mantel weaves terror into our minds so dexterously that we dread the dawn.  Our hearts thud with Cromwell’s as he faces the axe and suspense mounts: ‘Now the pages of the book of his life are turning faster and faster.  The book of his heart is unscrolling, the lines erasing themselves.’

This final episode of the trilogy will not win the Booker but in The Mirror and the Light, I believe we have prize enough.