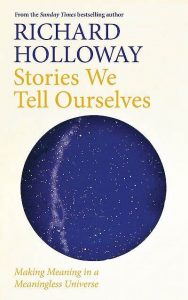 Former Bishop of Edinburgh, Richard Holloway explores the delicate intersection of faith and reality in his 31st book. Carefully examining the relationship between religion, belief, and perception, Stories We Tell Ourselves is written as much for others as himself. Holloway feels a path forward, navigating the fallout of a millennia of reading our species’ stories de mauvaise foi. Throughout the 228 pages, Holloway explores and binds together the problem of suffering, the Creation and Fall, and mysticism in organized religions.

I am of Chinese descent, raised Buddhist, turned agnostic, and have limited knowledge of Christian scripture or doctrine; this irony is not lost on me as I write this review. Especially since Holloway cautions us about reading our own beliefs and truths into stories and myths, transforming them into self-validation. In light of that warning, consider this my reading and interpretation of and into Stories We Tell Ourselves.

Holloway is consistently bold in both observation and critique of the actual and potential damage that misreading (or badly reading) humanity’s stories did―and still does—to untold peoples throughout history. Of particular note for him is the story of the Fall and how it has hurt women, and continues to do so.

Men have always made the world an unsafe place for women. There are many reasons for that, but one of them can be found in how an influential generation of Christian leaders infused their obsession with sex and consequent hatred of women into an old myth, and sent it into history to spread its stain.

A consistent theme is that stories, and by extension the faiths, beliefs, and religions that spring up around them, are social mirrors, showing humanity writ large. And historically, the reflection has been ugly.

Think of all the heavens that turned into hell. Think of all the absolutisms of the twentieth century and where they led us. The gods that failed. Because that’s what gods do. Fail. They always fail. And to repeat the paradox: this is why the men and women who might, just might have encountered the True God  – if such exists – are most afraid of all the other gods, the idol-gods made in our various images, not only because they are not god – a-theos – but because they are us enlarged and absolutised  – our own worst nightmare.

Ultimately, Holloway is hesitant at the end, unable to do as Dostoevsky’s Ivan Karamazov, to ‘” return Him [God] the ticket.”’ Indeed, he remains a Christian not because he thinks the institution is worthy, but rather because it keeps the idea of Christ alive: Christ the revolutionary. Christ with infinite capacity to love and forgive. Most importantly, Christ that acted rather than waited. He admits that this version of Christ is a story. One he tells himself. Thus, he remains a Christian.

The kingdom is already here but we don’t see it because we are looking in the wrong place. We are looking to heaven when we should be looking at earth. We are expecting God to do the work, when it is now up to us. Either because there is no God and never has been, or because God wants us to do the work for the work’s own sake.

This observation is in no way meant to be criticism of Holloway. To the contrary, I believe Holloway is even more correct than his book shows. If we read Holloway even further, an interesting dynamic emerges. If all the idol-gods are us—and they always fail―what does that mean? If the gods we create and believe are our own worst nightmares, if we are always-and-ever wanting, should we each of us not strive to become our own god? To live up to ourselves, and act rather than wait? To reflect not a nightmare, but a brighter future for us all?

Holloway tells himself a story. I tell myself a story of his work. What story will you tell yourself?