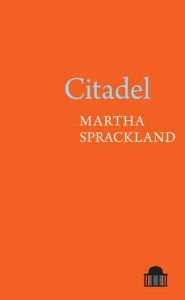 Citadel is Martha Sprackland’s first full collection, following two previous pamphlets (Glass as Broken Glass in 2017 and Milk Tooth in 2018) and a raft of poetry editing credentials. The slim volume carries fifty poems and has a density to the reading. This stems from the complex premise packed into the work: a historical reimagining of Juana Castile – known colloquially as ‘Joana the Mad’ – imprisoned in the citadel of sixteenth century Spain, and the narrative echo in a modern day poet speaking to her Spanish counterpart through the tin-can telephone that connects their worlds.

The collection sets off at a pace with the first stanza laying out Felipe’s claim that Juana ‘pierces and exsanguinates’ him. What exacting precision of vocabulary! That he is drained of blood by her behaviour continues through the poem with an understated emotive pulse that ‘throbs at the fingertip / she holds against hope […]’.

Sprackland forges a connection between two women that traverses time and space, and even logic, to deliver one unified voice of women pushing against all that imprisons them. The relationship is formed by the narrative conversation between the poems, and of the two women who sometimes speak to each other directly as in ‘Juana and Martha in Therapy’ through the ‘crackling string’ that ‘stretches five centuries’. Other instances blur an amalgam of womanly experiences, the ‘I’ tying them together as in ‘They Admit Themselves To The Inquisitor’:

When we undid the cord that tied our wrists
It bound us; something in that blow
Knocked through the city walls
And through it we are talking, still.

There is trauma on both sides of the wire, terrifyingly glimpsed in ‘A Room In London’, where women lay bleeding in their rows of beds after abortion:

an ache, a ferrous tongue, and then an orderly struggling to hold
my shoulders like the handle of a pneumatic drill

Safety is found in the act of conversation. Sprackland carves out space between the two points in time to examine shared experience. Themes emerge; fertility and motherhood weave through the collection as repeated questions. Symbolism also repeats: eggs feature frequently enough to be a fixation. From the title of the opening poem, ‘Poached Eggs on Toast’, onwards, eggs recur. The assault in ‘A Blow to The Head’ is like being ‘cracked open’ and what spills out is ‘blood or yolk onto tile’. In the final poem, ‘Transcript’, as the two women talk, the modern-day narrator anticipates the next day and speaks of trying to ‘hold the yolk of myself together’ ― a beautifully apt descriptor for many mothers facing the day ahead of them.

Although a number of poems are repeated from previous pamphlets and publication, this is not a collection that has played safe by compositing past works into a new form and supplementing with a few connecting pieces. Rather, Sprackland has created something of substance and variety. Even on the paper there is visual and linguistic movement from text-heavy pages to sparsely tabulated forms like ‘Lullaby’ that connects geographic names and places, a columned format for the ‘broken letrillas’ written for Juana’s entertainment using a classical Spanish lyric format of short lines and a repeated refrain at the end of each stanza:

Sprackland’s poetic process depends on the conversations held with an extreme figure from history, whose own voice has been long hidden, but without ever succumbing to biography or retelling. The end result is pleasingly strange; a collection which defies the limits of physics to find a timeslip between centuries old inner-city Spain and the north-west coastal towns of 21st century England.