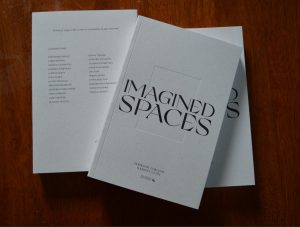 How do you cut into what Elizabeth Chakrabarty terms ‘the Trojan horse’ of the essay? Whether it’s lyrical, discursive, inter-medial, associative, reflective, self-reflexive, or something yet undefined, from the outset of Imagined Spaces, the form is as far from the familiar academic expectation as may be dreamt.

What then is this literal try, this attempt, this… what exactly? Gabriel Josipovici, in ‘On Being Hit on the Head’ by a Poem primes us: ‘your sense of confusion […] may be part of what it is about.’

Editors Low and Gunn, both practising essayists, have given themselves a difficult brief which they partly unpack in their questing introduction. Arguably, their editorial role is in itself strange as this book does not operate as a conventional anthology. These essays – some epistolary, some collaborative, some as much image as word – take Klee’s famous exhortation to ‘take a line for a walk’ into unmapped directions. Many are not self-contained but spill, to reference, learn and grow from one another. Consider the courageous ‘You by Me: Writing Depression’ (Stephen Carruthers & Fiona Stirling) which, as part of its layered understanding, extracts and enacts an element from ‘Songs I can’t Play’ (Stephanie Bishop).

Taking work, which is by its nature evolving, into publication presents a particular editorial challenge – entirely in keeping with the essay’s character. The exploratory, interconnected sequence of Imagined Spaces probes, requiring a very different reading; it will take byways through the extensive ‘Notes & Bibliography’, re-tracings, re-readings and occasional loops. It feels entirely reader-specific. For a book of around 200 pages, with so many contributors, this collection is longer than the sifter might think, being mycorrhizal in its scope. Low and Gunn talk of ‘essaying into the unknown’ where we are ‘to be surprised by and into life’.

If that unknown is ‘ a liminal space between belonging and estrangement’, it’s exciting to see duality teased out in several of the shared essays. ‘Home, Ile, Ghar, Hame’ by Tomiwa Folorunso & Hamzah Hussain investigates where and what that home may be for new Scots of dual heritage, seeking ‘to find the equilibrium of this balancing act’. Equally, in Politics of Small Places, Lorens Holm and Paul Noble find proximity in a witty correspondence across continents, in image and word… ‘I don’t think in words, I think out of words’ writes Noble. Worlds apart are also described in the often humorous, lyrical sharing of ‘The Flicker of North’, by Duncan McLean & Kenny Taylor, which finds North on both sides of the Pentland Firth, and beyond. Their essay ends by not ending; surely the essence of what we are now uncovering.

If, at this stage we find ourselves unsettled, less able to contain and define the form than we were at the outset, then surely Imagined Spaces is achieving its aim. When Susan Nickalls considers Dundee’s V&A in ‘Mind the Gap’, she’s contemplating Kumo’s intentions in designing a building ‘hard on the outside, soft on the inside’, imbued with the Japanese concept of ‘ma’. That space – where ‘truth resides in the gaps’.

Chris Arthur draws often and deeply on Eastern poetry and spirituality and here connects with visual artist Graham Johnston in ‘Line Drawing’, exploring their discipline’s shared pathways. When Arthur says of haiku that these poems are ‘able to cup their hands around the delicacy of the moment without crushing it’, there is a sense that that precision, that fragile yet expansive quality likewise holds good in a wider sense. There’ss something of that beauty, too, in the fragmented, spare, anaphorae spilling through Graham Domke’s ‘A Leaf Out of Someone’s Book’ and in Meaghan Delahunt’s delicate study of the deathbed’s restless nature in her ‘Life in the Bardo: Dying, Death & the Imagination’).

There’s an awkwardness between giving a balanced consideration of any anthology, without descending into glorified name counts. Perhaps the reader of Imagined Spaces comes to know less of the essay’s boundaries, and more of its vistas. That is to be celebrated.