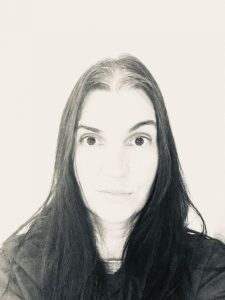 The rain falls in diagonal lines, bouncing off the roof of the car in continuous percussion. Water streams down the sloped driveway towards the house where the front door opens and a figure steps out. A man’s boot lands heavily in a puddle, sending water flying. “For fuck’s sake,” he exclaims eyeing his trousers, now soaked through. He runs towards the car, hunkering down as the rain hits his wide shoulders and back and stains a dark map across the fabric of his coat. He lifts a fob from his pocket, points it towards the car and presses a button. The headlights blink twice in response and a lazy, soft light slowly fills the interior.

The front door opens again and a woman steps out pulling the hood of her jacket over her head. She holds it there with both hands and moves quickly towards the car, clearing puddles with exaggerated strides. Folding herself into the passenger seat, she pushes the hood from her head. Her limbs are long and slim. Someone once joked that she reminded them of a Giacometti sculpture. She still wonders if it was meant as a compliment or an insult. Her fair hair is tied at the nape of her neck but odd strands have come loose and curl in the humidity of the sealed car.

The man turns the ignition and reverses out onto the road, flicking the wipers on. They burst into sudden life, waving back and forth across the windscreen, spraying the water left and right, over and over. As he drives, their monotonous rhythm adds to his sense of exhaustion. He feels porous, as if energy is seeping from him, drawn out by everything he has to contend with: the weather, the toast he burnt earlier and had to throw away, the alarm clock that wails into life at the same time every morning to wake him in time to drive to places he doesn’t want to go so as not to be late for something he doesn’t want to do. He becomes aware of a car behind them pulling out to overtake. As it sails past, he notices a sudden overwhelming urge to pull the wheel quickly to the right and knock into its side. He feels somehow diminished by the act of being overtaken and resents the way the car passes them so easily. He hears himself shout “Dickhead!” as its rear lights disappear into the grey sheet of rain.

As they pull up at traffic lights, the woman takes a sharp breath, on the verge of an announcement. “I wanted to talk to you abou….” she begins, but the man’s voice cuts in abruptly: “Switch the radio on for the traffic report…” and her sentence remains unfinished. She considers starting over but instead leans forwards to switch on the radio. The frantic, animated voice of the radio presenter fills the car and she sits back staring ahead amidst the noise.

They draw up behind a bin lorry, waiting for the lights to change with its engine turning. It is a huge juddering dirty beast which seems to loom over them. The hydraulic jointed arms that lift the bins are folded at rest, the rear hatch is closed, the remains of a cardboard box hangs from its lip like the remnants of a last meal. Small studs of red lights line each vertical side of the rear hatch, puncturing the grey, saturated air at measured intervals with their hazy glow. A red teddy bear is attached to the horizontal crossbar at the top of the lorry. Exposed to the weather, it hangs there like some benevolent totem.

It looks so out of place that the woman cannot take her eyes from it. Its huge, sodden head is out of proportion to the diminutive body vibrating against the humming metal case of the truck. Secured to the steel bar by a black plastic cable-tie bound tight around its neck, its arms and legs are splayed as if permanently ready for imminent embrace. The lights change and the lorry slowly moves forwards, the teddy’s head bobbing as the lorry bounces over potholes.

The road stretches straight ahead so they drive in concert for a while, the bin lorry closely followed by the car. There is something hopeful about the teddy, she thinks. She smiles imagining some kindly bin man rescuing it from the refuse, honouring it and taking the time to place it at the very apex of his vehicle. But as they continue to drive and she watches it bounce and judder in unison with the lorry, imprisoned at its neck, some unpleasant feeling surfaces that she cannot name and she wills herself to look away in a bid to make it disappear.

When they reach the junction, the two vehicles diverge. The lorry continues up the hill and the man indicates to take a right turn. As the car peels away, the woman shifts in her seat so as to watch the lorry heading into the distance, the red shape of the teddy becoming smaller and smaller. She feels something unknot inside her as it disappears over the hill and she can no longer see it. She exhales with a sigh and her breath steams up the passenger window. The man leans over and jabs a finger at the radio. “Fucking shite”, he says and they continue in silence.

Click here to read “Hooded”, a poem by Collette Cowie