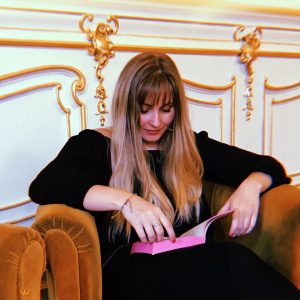 Under The Weather – KT Tunstall (2004)
/on homesickness

I inherited my voice from my mum. On the phone, no one can tell us apart. Even my gran, her mother, used to mistake us. She would talk to me for a whole five or six minutes before asking ‘what’s Rebecca doing?’ She thought she was speaking to her daughter.

Gran had a high, prim voice. We have quite low voices, me and mum, but sharp too; they’re not particularly melodic until we consciously flatten the backs of our throats to a softer register. We’re prone to nasal congestion – allergies and colds – but we sound quite good with a bit of throat-infection gravel in the winter, like we’ve got secrets worth knowing. Our sneezes and laughs come out the same, barked suddenly and loudly. We can’t sing but we’re both good at impressions, so we can imitate a tune if the singer has a thick accent. Mum makes up the words to songs as she goes along. I don’t sing unless I know them by heart.

We like KT Tunstall because we can sing her songs in our own accents. She’s Scottish and (at least on her older records) doesn’t try to mask it. Her music is synonymous with mum. I can’t hear Black Horse and the Cherry Tree without seeing mum stamping out the drumbeat in the gridlock as she drove me home from school, her tawny waves tossed about her face in a perfect tousle.

Tunstall’s Drastic Fantastic tour was the first proper gig I ever went to. I was twelve, me and mum went together, to the SECC in Glasgow. Mum wore black skinny jeans with chunky biker boots and a studded belt and I thought she looked even cooler than KT herself. In fact, at the same age, with the same name, the same 6ft swagger packed into 5ft2in stature and the same brunette mane, the only real difference was that one was on stage with an armful of rhinestone-encrusted guitar and the other was by my side. The show was an explosion of sparkle and grit and we enthused about it with such equal doses of gusto that the 20-year parent-kid divide dissolved. We were friends.

Over many gigs on many nights like this, the kind of night where mums make everything magic and you’ve got no idea they’re doing it, Glasgow became the scene of my dreamscape. I thought of nothing else but moving there for six years. Then I did.

When I got a place at Glasgow University to study physics, I surprised everyone (including myself) by saying I wanted to move to student halls instead of commuting. The trouble was, I was such a homebody; it hadn’t occurred to me that in going there, I was leaving here. That didn’t land for me until I was already gone; a new grief. I also didn’t know I was moving to the rainiest city in a country famous for being rainy. I fucking hate rain.

Oh, cause I’m under the weather,
Just like the world,
So sorry for being so bold.

And Glasgow is a fickle city; at night, it is a sprawling metropolis of colour, leaving trails of light and sound criss-crossing like aeroplane tracks through the neon streets. On hot summer days, its parks and gardens are brochure-worthy gems, verdant and lush, and the whole place buzzes like a beehive. But most of the time (i.e. during the day in every month that is not June), Glasgow is dreich. Like a sad seaside, the sky mirrors the wet concrete pavements, hard and grey. The greens leach out of the trees and congeal in papier-mâché piles of gutter sludge; the Clyde trudges along with the dull men in dull suits, bowing their heads against the wind that funnels through corridor after corridor of sandstone and slate. It’s miserable. By the time I had stopped getting out of bed for class or food, I wasn’t sure what came first: me being depressed or the place being depressing. I just knew I was sick of the rain.

For the first and only (touch wood) time in my life, I listened to a lot of music that didn’t make me feel anything. You’d think I would have picked comforting songs, that voices like KT’s would become a crutch but the truth was I didn’t think of crutches because I didn’t want to stand. I avoided every artist who reminded me of anything or anyone from before. Then I avoided the anythings and the anyones themselves.

I craved home but knew it couldn’t exist for me in the house I’d left; in leaving, I’d unfolded its walls. I had tried and failed to be an independent adult but all laws of society and biology told me there was no way back. So, five days a week I sat in a damp tenement and listened to prog rock with no lyrics and tried desperately hard not to think the sentence that undid my just-tied shoelaces each day as I faced down the front door: I want my mum.

When, after two years, I couldn’t soak up the torrent anymore, mum rented a van. My dad and boyfriend lifted the heavy boxes up through the marshy garden and mum and I packed the crockery. On the way back to the house, she sang along tunelessly to the radio, murmuring over the words she didn’t know and looking like herself. I watched her in the rear-view from the backseat. As we pulled into the drive she caught my eye in the mirror and said, in my voice, ‘just like that, home again!’. And just like that, I was.

Oh, cause I’m under the weather,
Just like the world,
So sorry for being so bold.
When I turn out the light,
You’re out of sight,
Although I know that I’m not alone.

Bonus Track: Suddenly I See – KT Tunstall (2004)
/on getting better

When I visited Dundee for a university open day, I went only to rule it out. After the ordeal that had come with living just a 45-minute drive from my parental home, I knew for a fact I wasn’t going to move further away on this second, bambi-like step out into the world. I didn’t know then that Dundee was the sunniest city in Scotland.

This northern city seemed to me a city in name only compared to the glamorous, angular ramble of Glasgow. These low, humble buildings and horizon made of hills and water were just so… easy to look at. Sure, there was a university, and shops and restaurants, independent cafes and buskers and people with blue hair – everything a city boasts – but there was sky everywhere, too.

That day as we wandered the tidy campus (compact and sensible as opposed to the mile-long street of University Avenue), I said (over and over), ‘Look. You can see the sky’. In Glasgow, the only way to see sky was to look straight up, like Bane in the pit. Here, it was in front of me, and behind me, and just there. I knew by the end of the visit that this was my home, but I couldn’t vocalise it. It felt too simple. All my experiences so far told me that home was something you had to carve out and sweat over, a spoon-dug tunnel in a dank prison cell. But here… here it just hung in the yellow air, like dust motes.

Suddenly I see,
This is what I want to be

Sometimes certainty is scarier than the unknown. With certainty comes the knowledge of everything you don’t need.

I lost a lot by moving – a job, my friends, my relationship… (my sense of self, for a while). But eventually, armed with my first-class degree and disarmed by its lack of importance, I got a new job. It was a graduate job at a newspaper, and it was in the tallest building in this short city, which meant it was important; important enough that it that justified (on paper) everything I’d given up to get where I was. The building had marble steps up to a revolving door and I wore a brand-new berry-pink suit and would get a salary. These things delighted me, but still I wasn’t entirely convinced I belonged. I felt like I was play-acting, and at any moment someone was going to swipe my shiny new shoes out from under me with a comically large hook.

Then one day, a couple of months in, I stepped out of the lift and was met with a frenzy of black and grey polyester. Journalists crammed round the windows and craned their necks like meerkats to see the street below. Half-drunk cups of tea with lipstick rings manned the desks; swivel-chairs rolled idly across the floor, abandoned. I smiled – all the signs of office gossip.

‘KT Tunstall! She was just busking outside.’

I hadn’t seen her.

I’d missed her by about five minutes, I deduced from the snatches of conversation that floated through the office like confetti after the commotion. Sliding-door regrets nagged me – if I’d just come in through the front door instead of the side entrance, or if I hadn’t stopped at the mirror by the lifts to fix my hair, if I hadn’t had these stupid heels on to slow me down – but I couldn’t commit to dwelling on them. I felt better, felt excited, just knowing she’d been there.

Sneaking back into the lift, I slipped outside to the alcove by the door where the cleaners smoked, and looked at the spot where the others had said she’d stood. The sun was out and I traced the building’s solid shadow with the toe of my shoe as I held the phone to my ear. It rang just once.

Suddenly I see,
Why the hell it means so much to me.

‘Mum,’ I said, in her voice. ‘You’ll never believe who was just here.’