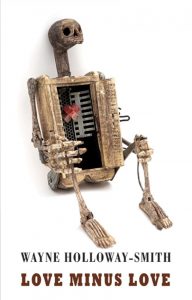 Love Minus Love is the second collection from Wayne Holloway-Smith. It reads as a continuous, fractured train of thought exploring the poet’s childhood trauma, his relationship with his dad, his mum and mental illness. Sitting on the cover with its hands on its knees is a skeletal robot, the box of its chest burst open. Between metal ribs a red block sits as a heart. The jaw is lost, giving the skeleton a vacant expression. It sets the tone for what follows: Holloway-Smith’s poetry is fragmentary, brutal, surreal and often heart-breaking.

Building a review is in some ways a difficult task when the collection is not designed to be dipped in and out of, but functions instead as a whole in its entirety. I read it in one sitting and by the end my head was spinning with the repeated images: tv always on in the background, meat a constant, nauseating presence, cigarettes, teeth, photographs, dead cows and childhood friends looping endlessly with nightmarish obsession.

the cow of course is dead the cow is covered in gravy now there are also
peas Sundays there was a tooth on his pillow which he hid he hid it the
whole of the world is arranged around that tooth now in hiding or the gaps
in his mouth later she will do the washing up [.]

The vivid elements of the everyday are transposed into surreal poetic form, imbuing them with a sense of prophetic symbolism. Immersed in the collection as we are through encountering these trains of thought, we ourselves feel the same frantic claustrophobia. In an interview with irisi magazine, Holloway-Smith declares that poetry, “is intrinsically linked to empathy”, and perhaps this quality of poetry can be experienced here, through the poet’s ability to place us in his own head space.

His lines, stripped of punctuation, scar the centres of the pages. His poems take the forms of agonised, stretched out lines, the shape of stubbed out cigarettes, lists ( ‘DAD’S DICK / FLOPPY DOG TONGUE / PIG’S SNOUT’) and bracketed extracts. There is a playfulness in the form, a wry self-awareness that yes this is poetry – ‘the wallpaper is blue because I am depressed’ – but a toying with what poetry can mean, and how it can express itself.

The playing with extracts – from stories found on the internet to Kafka – helps to enhance the collection. The poet has plucked what resonates and made it his own, until the fragments of his thoughts and those of others blur together almost seamlessly. On two nearly-blank pages stand jammed together lines: ‘butthemothermustbenobleandheragonyredemptive’ on one, ‘withthesufferingofthewholeworldetchedonherface’ on the other. They come from Jacqueline Rose’s Mothers: An Essay on Love and Cruelty. In the collection these lines segue into the 2018 National Poetry Competition winning ‘the posh mums are boxing in the square’, separating reality from triumphant daydream. The words run together, making them difficult to read and perhaps tempting to skip over. But they’re given space – so much space – that they must be noticed, considered, read. The silent suffering given precedence through form.

the posh mums are boxing in the square
roughing each other up      in a nice way [.]

It’s easy to pick this poem as a stand out of the collection. It draws us in with this absurd, comedic image before building to the emotional gut-punch of the poet’s mother resurrected and re-imagined, given the tools to fight for her life as he writes her warm weather, a friend to keep her company, strength and health. The conclusion feels triumphant, which makes the melancholy even stronger: this wasn’t how it happened, only how the poet wishes it could have gone. The collection as a whole partakes in this feeling, an aching to re-write and re-structure the memories of the past.