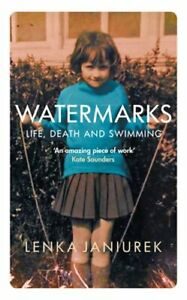 Lenka Janiurek’s compelling memoir, Watermarks, ebbs and flows through a life shaped by trauma and loss. Beginning with her own birth, ‘I am in water, submerged and suspended’, Janiurek floods the text with densely detailed descriptions of a turbulent life. At six years old, the loss of her mother changes ‘absolutely everything and everyone for good’ and her family is ‘torn asunder’. Her emotionally detached Polish immigrant father quickly moves on to a new wife and children, relations with her five siblings deteriorate and Janiurek then drifts between abusive relationships and foreign places in attempts to ground herself. Her displacement as a motherless daughter seeps through each stage of her life but she finds purpose in motherhood and comfort in nature. Her affinity with water is a punctuating feature of the text and where she seeks reassurance and validation, as if in return to the womb.

Through a disjointed first-person narrative that spans decades, Janiurek travels across Europe, writing predominantly in the immersive present tense. She glides between time and location, occasionally floating from tense to tense simulating the fluidity of memory. Her prose style favours staccato syntax, creating an anxious but progressive read with an incessantly raw portrayal of distressing situations. Despite the intimate perceptions of turbulence, including domestic assault, fearful journeys through war torn lands and intense loneliness, Janiurek’s phrasing remains unsentimental allowing the reader to generate her own emotional response to the unfolding drama:

My heart thrills, my mind blows, my tears roll. I am alone, but I am not alone.

The reader treads water with the narrator yet remains in suspense of the emotions that lie beneath the surface. Januirek doesn’t labour her points:

I experience terror. He chucks stuff at the windscreen. Eventually he conks out, passes out, so we pull up and we all sleep.

The prose is quick-paced and eventful but is juxtaposed with beautifully arresting descriptions of Janiurek’s experiences in water. Contrasting the immediacy of hard realism and shattered identity, her immersion in the sea, lake, rivers, rain, is described in careful and poetic prose, suspending both writer and reader in moments to savour, pause and reflect, creating a sense of wholeness:

I’m in the belly of the earth with all her blessings, and feel scared, elated, and humbled…

All beautiful, all full, all true.

Succinctly detailed, intimate yet distanced, Janiurek’s revelations convey a comprehensive account of her own life but she remains a courteous writer throughout, careful not to make assumptions about the choices or thoughts of other characters in her story. While she doesn’t delve too far into her father’s background, her observations of his difficult behaviour and portrayal of him as outsider are enough to hint at the generational trauma she has inherited that contributes to her own sense of displacement:

He is always foreign in England, his name, his accent, his gestures, his tastes, his bark, his smell. His memories are foreign…

…All I know is he is different from other fathers, but I don’t know why.

This is a memoir that transcends memory; a memoir that seeks more than identity. Janiurek writes to find safety on the page as she explores a fragmented self, a shattering consequence of early trauma. For the writer memoir becomes, like water, a place to feel weightless, a place that holds the strewn fractions of self together in one place. As water saturates the text, the reader is pulled along with Janiurek as she swims through the unfolding narrative. Watermarks is a memoir that explores how experience shapes the individual as water shapes stone, carving out the unique story of a woman. Lenka Janiurek suspends herself in the writing, finding safety, comfort and self in the process of expression. A book worthy of full immersion.