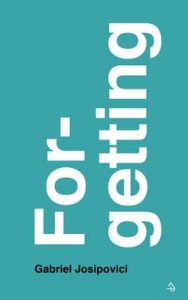 This little book addresses big themes. It is a serious but engaging essay which invites reflection on loss and the ways we respond to it, individually and collectively, and how these have changed culturally over time. Josipovici tightly structures twelve short sections, each focussing on an aspect of forgetting and its counterpart remembering, weaving them together in a rich exploration of these very human processes. From the small and local to the large and global, there is a recognition of memory as active and selective. What individually we forget and what we choose or are sometimes instructed to remember becomes a constructed narrative – of our personal history, or of a tacitly adopted public version of events.

Josipovici is an esteemed academic and writer of both literary theory and a range of creative forms – novels, short stories and plays.  Now eighty, he opens by acknowledging a fear of Alzheimer’s, a neurological erosion of the mind and the parallel fragmentation of a self. He moves from the biological into more interior territory, using many examples from the visual and written arts to illustrate his themes as he goes. Art, for Josipovici in our modern world, is the way now left to us in negotiating our encounters with loss.

As in his earlier works, Josipovici interrogates notions and practices of tradition, asking what, at the level of human experience, we lose when we abandon, for example, shared communal rituals of burial, of lamentation. How do we now find ways to lay the past to rest? And more fundamentally he invites us to think about what constitutes a person in the first place. For memory, like us is complex. Our identity links closely to our ability to remember, but also he suggests to our need to forget.  Memory, both personally and from a societal perspective is a delicate balance, of what is needed and what is manageable. Sometimes we need ways to forget.

Josipovici fled from the German occupied France of his birth, settling in Britain as a young man. Not surprisingly The Holocaust occupies a central position. The injunction ‘not to forget’, he reminds us, often arises out of political, rather than humanitarian motives. He references David Rieff’s In Praise of Forgetting which further expands on the misuse of sloganeering by demagogues, for example in Srebrenica. In relation to the Holocaust victims Josipovici describes two sculptures which have a double task. Rachael Whiteread’s ‘Judenplatz’ and The Berlin Memorial both offer sensitive participation in the act of remembering individual lives lost while simultaneously representing a public recognition by the commissioning state of its own role in the atrocities played out.

Hamlet provides another vehicle through which Josipovici unpicks the complexities of forgetting or remembering within an individual heart and mind. Shakespeare, as a playwright for the people, captures the changing pulse of the times, in transition from a medieval to a more modern way of perceiving and doing things. This awareness haunts this king’s inner ambivalences and confusion, acknowledging old solutions will no longer do.

The book is ambitious in its coverage. Its brevity precludes a more rounded discussion of the many ways minds and bodies filter information. Josipovici is at his best in his dissections of art’s representations, its bridges between personal and cultural worlds. Monuments themselves, a raising up onto pedestals of our previously claimed heroes, now cast darker shadows. Admiral Nelson. Cecil Rhodes. The book was written just before ‘Black Lives Matter’ re- enlivened perceptions, of passers-by now less deferential, less passive, less willing to forget and forgive the past. There are prescient references in Forgetting to the toppling of statues of Stalin for example, and a referencing of Trump’s responses to Charlottesville clashes.

The poignant closing section ‘Letting Go’ returns overtly to what has been a pervasive undercurrent throughout, that of our own oblivion, our final forgetting. We leave Josipovici pensive, contemplating how, in Wallace Steven’s words, ‘the absence of the imagination had/ Itself to be imagined’.