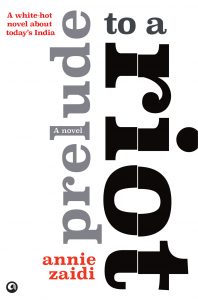 Annie Zaidi is a writer, journalist, prize-winning playwright and essayist whose novel, A Prelude to a Riot was shortlisted in 2019 for the JCB prize for Indian literature. The book centres around three generations of two landowning families, one Hindu and one Muslim, in an unnamed town in Southern India. Other characters include Garuda, a high-school teacher struggling to inspire his students to think critically about India’s history, Mariam a masseur to pampered tourists, and Mohammed and his son who are migrant workers.

Zaidi tells the story mainly through a series of soliloquies, but also includes poetry, letters, and newspaper articles.  The soliloquies are intense, slow-burning, intimate portraits of the personal ‘riots’ in people’s lives. Characters simmer with jealousy, suspicion, and rage at injustices. Others like Devaki experience a different kind of turmoil; newly married, she defends the rights of the migrants, and worries about the escalating extremism of her father and brother. She is an intriguing character who has defied the menfolk in her family by marrying Saju, who belongs to a different caste.

As the stories of the characters weave together, Zaidi explores what pushes a community that has lived together peacefully for generations towards religious intolerance and violence.

The novel begins with a sense of foreboding when strong-willed Fareeda challenges her nature-loving grandfather Dada, a landowner who talks lovingly to his plants, about the brewing unrest between the two communities:

I asked him straight off.  Do you see it coming?

Dada, prophetic, devout, tolerant, sees only the good in life:

Love and patience.  Nothing it can’t do. . .When you love, you don’t just scratch the surface.  You dig deep, gently uncover.

His counterpart, the landowner Appa has an eye for business and is less connected to the land:

Amma used to say, it is better that he remains busy with outside matters and does not ruin her crop. They forgot to mix earth in his milk.  That’s what she used to say.

Tensions abound as labour and goods costs rise, while the price of agricultural produce falls.  The arrival of migrant workers fuels suspicion and generates a heightened sense of ‘them’ and ‘us’ in the community. Prominent people in the town, including Appa, create the ‘Self-Respect Forum’ and speak out about the threat of illegal migrant workers while continuing to exploit these workers by paying low wages.  A young Hindu girl is forced to eat pork by her Muslim school friends. The unexplained death of a young Muslim migrant worker is reported in the local paper. Throughout all this turmoil, it is the quieter voices of the women that come across as reasoned, tolerant, and more understanding of the complexities of life.

The tension is palpable; we sense what lies ahead. Ironically, it is the inebriated Garuda whose social commentary offers the clearest insights:

No big colonial sword needs to come down and slash the fabric of the nation.  Muscle by muscle, atom by atom, we are being torn from within.  We are our own bomb.

A Prelude to a Riot is a book for our times, a harrowing account of division and uncertainty not just in India, but in many other parts of the world. There are no easy answers, we must all guard against judging others based on gossip or jealousies, reasoned voices exist, and maybe it’s no coincidence that Zaidi gives the optimist Dada the last word,

I saw my garden, and a bunch of ripening bananas,
the fruit only as big as my forefinger.  Almost ready.
Then I heard the azaan from the new mosque.  Then
birdsong.  Then it was time to get up and go.