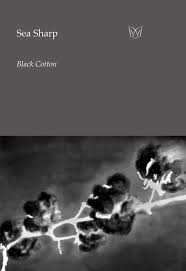 Black Cotton is Sea Sharp’s second poetry collection after The Swagger of Dorothy Gale & Other Filthy Ways to Strut, a Prairie Seed Poetry prize winner, and it is hard to believe that Black Cotton would not have the same potential as its predecessor due to its ingenuity. Born in Kansas but with a dual British-American citizenship, their poetry is deeply rooted in past and present, exploring timeless themes as part of an ever-critical society: racism’s place in society, in relationships, and its impact on the nature of gender and queerness. In Black Cotton, Sea Sharp addresses  their subject matter through form and style and vice versa, having the wit, skill and strength that’s needed to scrutinise  being human, as well as being discriminated against as one, too. Sea Sharp compels the reader by unapologetically presenting these fundamentals without diluting them.

So we wrote them a poem,
something fragile to tear apart.
Our writing made broken
so they could feel smart.

In this sense, Sharp time travels, drawing on events and people spanning centuries, moving through history without losing any passion. In ‘This Time’ the dedication reads; ‘After Judge Glenda Hatchett, speaking on the unlawful killing of Philando Castile (July, 2016)’ and the poem goes on to weave a picture of modern society that has been seen such killings too many times, their terrifying consequences, or, for others, the lack of them.

This time he won’t
say a word, won’t kiss
his daughter goodnight.
He won’t even beg for his life.
This time.

Racial inequality is a spur for poetry; Black Cotton, focusing as it does on the injustices and cruelty many face, daily,  (‘This Time’ and ‘Untitled III’) and often how American politics exacerbates it (‘In God We Trust & Other American Nonsense’ and ‘Locker Room Politics’). The haunting voice, which demands thorough attention, changes in ‘Epigrams To Footnotes’, which utilises presentation and skilful literary techniques such as imagery, metaphor and structure. An epigram begs to be noticed, to be memorable. The footnote, by contradiction, is an afterthought, something a reader must be aware of but does not need to know intimately. The poem, placed on the right-hand side of the page, and the footnotes, aligned to the left, represent the division between them when usually the latter supports the body of a text. However, Sea Sharp  changes their significance by giving them, as it were, a voice of their own, a weighty intensity. The antagonistic voices read as paradoxical and they can be understood separately in the same way a sock can function on its own but is more effective in a pair.

I was written in a book by a worm
on a noble little leaf of paper. 1

1. And I am mounted on a rock to lead your voice to shore.

The personalities conveyed come down to small features. The first line of each stanza of ‘Epigrams To Footnotes’ begins with a begged ‘please’ onto ‘I said’ and ends with the command ‘do not’. The stress on these words becomes irritation which in turn feeds the ironic contrast where the main body of the poem appears stringent and absolute, and the footnotes more poetic. The rigidly repeated ‘I am’ and associated images leave no room for assumption. Instead, this fluidity must be found in the footnotes, though this new consideration begs the question whether they can still be considered only ‘a sidekick for literature’.

The reader is not comforted in this collection and does not have their hand held, but must learn by themselves what it means to be a victim of racism, sexism, and homophobia. Sharp’s voice carries across the pages to illustrate the isolation of becoming a victim while still connecting people across time and continents.