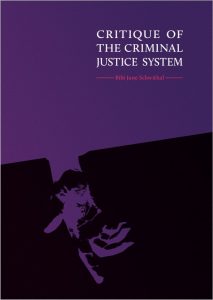 Critique of the Criminal Justice System is the latest book from non‑binary Glasgow based poet, theatre maker, and producer Bibi June Schwithal. As one might infer from the title, this work deals intimately with themes surrounding prison and the ‘justice’ system. More so than that, there are echoes of common themes in Schwithal’s other works here as well: queerness, introspection, and a critique of capitalism. The book attempts, and successfully navigates, a balancing act between a detached distance and raw emotion, ideals and material reality, and the duality of suffering that incarceration brings. For every Bibi June Schwithal in the world there is an unnamed brother in chains as well.

(‘Critique of the Criminal Justice System’)

One of the implicit questions that Critique of the Criminal Justice System asks us to wrestle with over and over again, is what exactly does prison actually do? It cannot undo a choice or an action, no immanent power could do that. It does not heal, for how could an arresting of time do anything but create a jagged person‑shaped hole in lives everywhere and leave us disappointed when it isn’t perfectly filled x number of months in the future? Abolish Prisons.

A constant recurrence in Critique of the Criminal Justice System, is that we are asked to re‑evaluate accepted abstractions of reality. Prison, Criminal Justice, Border, Crime, we are taught to accept these concepts from a young age in society, to take them for granted. Echoing Althusser, to interpellate them. Here though, Schwithal asks us to question why. What is a border other than ink on paper, lines on a map, a non‑existent ‘thing’ that causes existent suffering? Abolish borders.

The less obvious question in ‘Borderline’ is what is a crime?

(‘The Principles of Transformative Justice’)

Here Schwithal navigates the balance between a distant detachment, the laying out of the poem as if they were the givens in a logical proof, and a wellspring of emotion, the footnotes that give us an intimate insight into their own personal engagement with the question.  In their examination of ‘crime’, Schwithal returns to the question of what the very concept of prison accomplishes. ‘Crime’, as it is colloquially thought of; an act that violates law, serves as nothing more than the condition for othering and perpetuating suffering. Abolish crime.

In its totality, Critique of the Criminal Justice System is many things, and it does many more. It is personal, a one‑sided conversation. It asks us to do what is difficult. To question ourselves and our own biases. To engage with emotions and to remind ourselves of how impossible it is to strip feeling out of a system that forces the separation of human beings. Abolish the system.