Alan Warner’s first novel, Morvern Callar, was a critical success, hailed as “haunting and brilliantly original”, with a character that is “impossible to forget”. It claimed the Somerset Maughum award in 1996; since then, Warner has won many prizes including the Saltire Book of the Year award (twice). He was also long-listed for the Man Booker END_OF_DOCUMENT_TOKEN_TO_BE_REPLACED

Within this Dust consists of five performances and opens with ‘Embers’. Muted light centres upon pieces of white paper piled high in the middle of the stage. The audience may be unaware at this point that Marta Masiero is hidden behind this mound of scraps. Until, that is, she begins to sway slowly. We hear END_OF_DOCUMENT_TOKEN_TO_BE_REPLACED

Recently, I had the pleasure of interviewing Percival Everett, Professor of Literature at the University of Southern California and author of novels such as Erasure, I Am Not Sidney Poitier and Assumption. Everett, who hails originally from the United States, has relocated with his family to Paris for a year. My current research explores identity END_OF_DOCUMENT_TOKEN_TO_BE_REPLACED

Q. What if this book doesn’t work? A. It will work Q. Is it guaranteed to work A. No This typically dysfunctional Q & A forms the introduction to artist David Shrigley’s first attempt at spinning his whimsical sentences and absurd drawings into a structured narrative. How Are You Feeling: at the Inside of the END_OF_DOCUMENT_TOKEN_TO_BE_REPLACED

The Scottish Ensemble’s four-day residency in Dundee ended with the a concert featuring tenor Thomas Walker and a series of projections by video artist Netia Jones. Members of the Caird Hall audience were treated to an impromptu pop-up performance as a curtain- raiser. Starting from the rear of the hall, before moving onto the stage, END_OF_DOCUMENT_TOKEN_TO_BE_REPLACED

There is much to be admired about Lewis Hyde’s Common as Air: Revolution, Art and Ownership, which critically enquires into the intellectual and historical development of our current laws and practices dealing with intellectual property. His guiding thesis, that the public good should limit the duration of any monopoly by artist, inventor or thinker on END_OF_DOCUMENT_TOKEN_TO_BE_REPLACED

The memoir And Crocodiles are Hungry at Night is a powerful and compelling account of poet and academic Jack Mapanje’s experiences of Malawian prison and the effect this incarceration had on him and his family. In 1987, Mapanje was imprisoned for over three years by the authoritarian regime of Malawian President Hastings Banda, never once END_OF_DOCUMENT_TOKEN_TO_BE_REPLACED 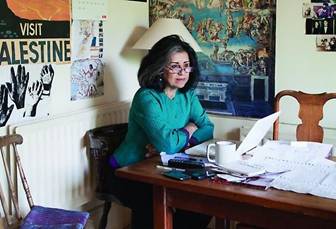 Alamri: Bismilah. First of all thank you for granting me this interview in your house and thank you for this lovely food. Tislami [Thank you]. Congratulations on your recently published book, Cairo: My City, Our Revolution. Reading it reminded me of your first novel In the Eye of the Sun; I was struck by its END_OF_DOCUMENT_TOKEN_TO_BE_REPLACED