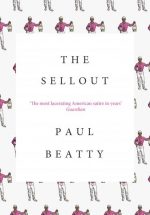 Paul Beatty (Oneworld, 2016); pbk, £12.99 Paul Beatty’s latest work, Man-Booker Prize 2016 shortlister, The Sellout, is a novel about town planning. Not, perhaps, the stuff of what the New York Times has called “the most badass” American novel in years but, as Beatty’s vivid depictions of L.A. and Washington show, appearances can be deceiving. END_OF_DOCUMENT_TOKEN_TO_BE_REPLACED