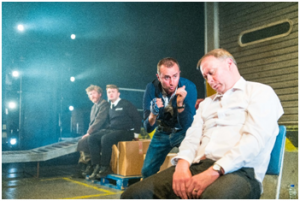 Dundee Rep Theatre’s latest production is Gagarin Way (2001), Gregory Burke’s debut play. Set in Fife and telling the story of two downtrodden factory workers who kidnap a member of senior management as a form of protest, and the security guard who becomes entangled in their scheme, the play expertly walks the knife’s edge between dark comedy and political thriller.

The set of Gagarin Way is impressive: an authentically grimy factory floor on two levels, connected by a rolling conveyor. At the back is the looming loading bay door, and the moment when it rolls up to reveal the van reversing onstage is every bit as theatrical as promised by Cora Bisset, the play’s director, in an interview with me. We are greeted with the image of the shadowy figure of Gary (Michael Moreland) standing in the back of the van over an unconscious body, demonically backlit with red light, a reference perhaps to Gary’s Communist beliefs. This introduction establishes Gary as a powerful figure, a power that is gradually lost as the play progresses. The set’s different levels help visualise his loss of authority. As Gary loses control of the situation, he goes from standing in the van, above the stage, to sitting sobbing on the ground, on the stage’s lowest tier. His downward personal journey could also be said to reflect the historical trajectory of other failed Socialist uprisings and the gradual disenfranchisement of individual factory workers. 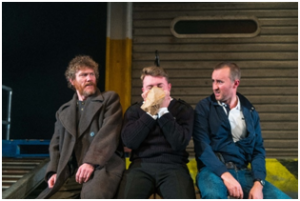 On one level, the characters represent clashing ideologies. Gary is the hardened socialist, his hope for change turned into desperation; contrasting him is Frank (Barrie Hunter), the embittered capitalist. University-educated Tom (Ross Baxter) is the optimistic liberal youth, seeking compromise. His opposite number might be Eddie (Ewan Donald), who represents the epitome of the demonised working class: a volatile track suited man, switchblade in pocket. The tenuous connection between them all is Fife, and frequent references to Fife’s history and geography helps keep the play’s extreme events grounded. The failed attempts of certain characters to bond over this connection – for example when all four men commemorate their relatives who took part in the miner’s strikes – and so avert the downwards spiral might hint at a wider struggle for men to form bonds under the weight of toxic masculinity, which glorifies brutality and demonises emotional openness. 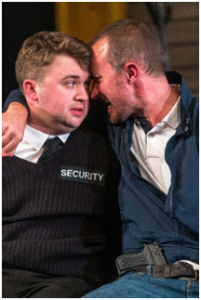 The writing and performances give the characters depth, ensuring they are more than political strawmen. Focusing on the ways in which ideologies play into characters’ relationships with one another brings the play’s political themes to the forefront of the story in a way that feels natural, rather than obtuse or didactic. For example, the play opens with Eddie delivering a sarcastic but impassioned lecture to Tom on French philosophy. When Tom is impressed, Eddie quips “Aye, well it’s amazing what you can do with a library card”. Eddie’s disdain for both Tom and academia is evident, but he also reveals a more intellectual side, addressing class and academic gatekeeping.

Gagarin Way contains marvellous dark humour. The dialogue is fast-paced and witty.  There is also entertaining physical comedy like Frank’s trussed up body sliding down the rolling conveyor. The comedy balances the story’s darker moments to play with audience expectations and so heighten the on-stage tension. Without giving too much away, one of the play’s best moments builds pressure and conflict to an almost unbearable degree, only for the climax to be hilariously subverted. The night I was attending, the entire audience erupted with laughter at this. But when a character pulled a knife, the room instantly returned to terrified silence.

Overall, the fantastic acting, inspired set design and brilliant balance of comedy and tension makes this a very entertaining production. More than that, the play’s humour and the recognisable frustrations of its characters, prove that politics, class and masculinity are still as relevant today.

Ed: A short interview with Cora Bissett, director of Gagarin Way, can be found HERE.