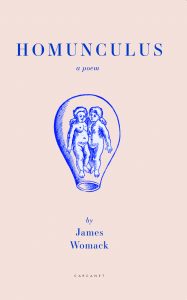 Whether intentionally or not, James Womack’s translation, if we can call it that, of Maximian’s Elegies comes at a rather appropriate time. A global pandemic ravaging the world with seemingly no end in sight, ecological and societal collapse perhaps just a few decades around the corner, we find ourselves asking the question: how does one face the slow, inexorable march towards oblivion?

The third collection from the award-winning poet and translator hits hard on timeless topics such as decrepitude, despair, and sex. Lots and lots of sex. It is arguably the central thread that strings together the six cantos in the 2,200-line work. This interpretation of the Elegies puts a modern spin on the serious nature of content, creating a rhythmic flow of references woven into the pacing of the poem.  From the Grenfell Tower fire to Voltaire’s Candide, to Scooby-Doo, such allusions reinforce the eternal quality of the problems raised by the titular Homunculus.

The foreword To Maximian warns us not to expect any happy endings:

This Easter, when smoke filled our eyes
from the Great Fire of England,
over the years I reached to you,
expecting at best a handful of ash.
No, but you did respond: not with consolation,
not that: rather dark-eyed and weary
in the teeth of our eternal similar mistakes.

(Bear this in mind: I call your book Homunculus
because I lack the balls to call it Sperm.)

Decline is all we can hope and prepare ‘for a handful of ash’, a ‘dark-eyed and weary’ jadedness that can only be understood by one who longs for halcyon days. The serious and subtly bitter tone set forth here will characterize Homunculus; yet that gravity is immediately mollified by a tongue‑in‑cheek declaration of how if he was braver, this review would be discussing the boldness of titling a poem about old age and sex, Sperm. This shift in vernacular cadence continues throughout the poem ebbing and flowing between lyrical verse and a much more brash, conversational tone.

From start to finish, we are asked to question the notion of social acceptability, of what is appropriate. Womack’s translation uses old age as vehicle to make us question whether propriety is indeed proper.

I used to be held in some respect,
but they made sure to spread the story:
the older man, giddy as a schoolboy,
can’t even keep his dreams to himself.

Similar to Karl Ove Knausgaard’s Min Kamp, Womack’s Homunculus is brutally, even indecently honest about the titular character’s feelings and thoughts. Why do the people in the work snigger or jeer at an old man still in the throes of desire? After all, is he is not still human? Are we supposed to fade into sexless automatons as we age?

Not so, for even the Homunculus is told not to give in; rather it is natural, nay, even necessary. To desire is to live―it is of life. Here towards the end of the poem, the poetry crescendos into a passionate polemic urging the Homunculus to will himself to fuck.

Yes, I can have the last word, and my last word is this …
grow up, grow up and use your cock
for what it’s meant for, not to think with.
An unthinking penis, kept at work in bed,
will do more good than when frustrated,
filling a man’s brain with boiling, aggressive sperm.
If your prick is limp, your thoughts go elsewhere.
Everything yields to a non-metaphorical penis
even the highest, most sacred things.

Homunculus offers us no answers to these questions, but it does remind us that this brutal reality is not unique but rather a shared, mundane constant from Maximian all the way to modernity. This at least, may offer the reader some small measure of comfort. In the end Womack’s Homunculus, ends nowhere. Yet nowhere is better than a definite end. For in nowhere lies the possibility of everywhere.